It's a very interesting theme, because the hungarian men's wear had many impressions during the 16- 17 th centuries.Altought we can say about the women outfit that had so many spanish clothes next to the hungarian types, men wore a sort of eastern style attire.
The difference between the hungarian ang ottoman-turkish custome are the headdress and the trousers. Both of them wore a kind of jacket came down to the kneel or at the and of the 17th century to the thigh. In Hungary this is called dolmány. Over that they wore a mente, which could be a long sleeved, half sleeved type or we know mentes without sleeves. 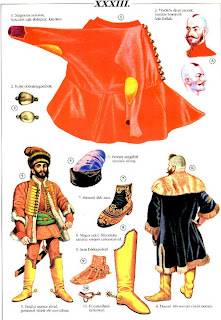